Superstar NHL Athletes - Where do they come from? 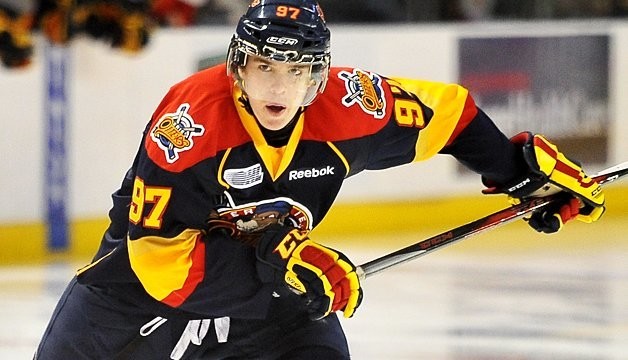 The Annual NHL Entry Draft - is a place where many life-long dreams come true and the destiny of certain franchisees change forever.

Each year, 30 NHL teams systematically select the rights to some of the brightest young hockey stars from around the world. At the end of the season, the 14 teams which failed to make the playoffs are entered in a weighted lottery to determine the initial draft picks in the first round, seeded according to regular season standing. Essentially, the worst the team during the regular season has the highest probability of selecting 1st overall in the draft. The remaining order is determined by the Stanley Cup playoff results.

Canada, particularly Ontario, has always be touted for producing the most NHL players each year. In all fairness, it is typically (let's exclude this extremely mild "winter" we are having) close to or below 0°C for a large chunk of the year in many parts of Canada. So it's not hard to understand why we have always been good at a game that consists of skating around on two thin blades and ice. This ideology has been cemented by the fact that some of the greatest players of all time, for example, the "Great One" Wayne Gretzky, Phil Esposito, Doug Gilmour, Paul Coffey, Brett Hull, Joe Thorton, Bobby Hull, Brendan Shanahan, Eric Lindros, and Bobby Orr all call Ontario home.

As someone that is interested in helping athletes out financially, it is important for me to understand where these individuals come from. For me this meant looking independently at each draft over the last 15 years and determining the teams and leagues these athletes were getting selected from.

Let's take a look to see if there is any truth to the claim that Ontario is king of the hockey castle.

First, let’s look at the total number of players drafted each year.

Secondly, we need to identify which possible leagues these individuals are being selected from. The Canadian Hockey League (CHL) is an umbrella organization that represents the three Canadian-based major junior ice hockey leagues for players 16 to 20 years of age. The CHL is comprised of the following three leagues;

The top tier junior hockey league south of the boarder is called the United States Hockey League (USHL). Outside of the CHL and USHL, players typically come from the NCAA or one of the many European leagues. Now that we have established the main sources of draftees, we can dive in a little deeper and look at each league and at the number of individuals selected each draft from each team. Let’s dissect each of the leagues mentioned above, identifying the teams within each league and the number of players from each team that have been drafted into the NHL within the last 15 years…

You are welcome along the way to find your favourite team and check out how successful they have been over the last 15 years in producing NHL calibre players and/or winning any championships.

First Up… The WHL 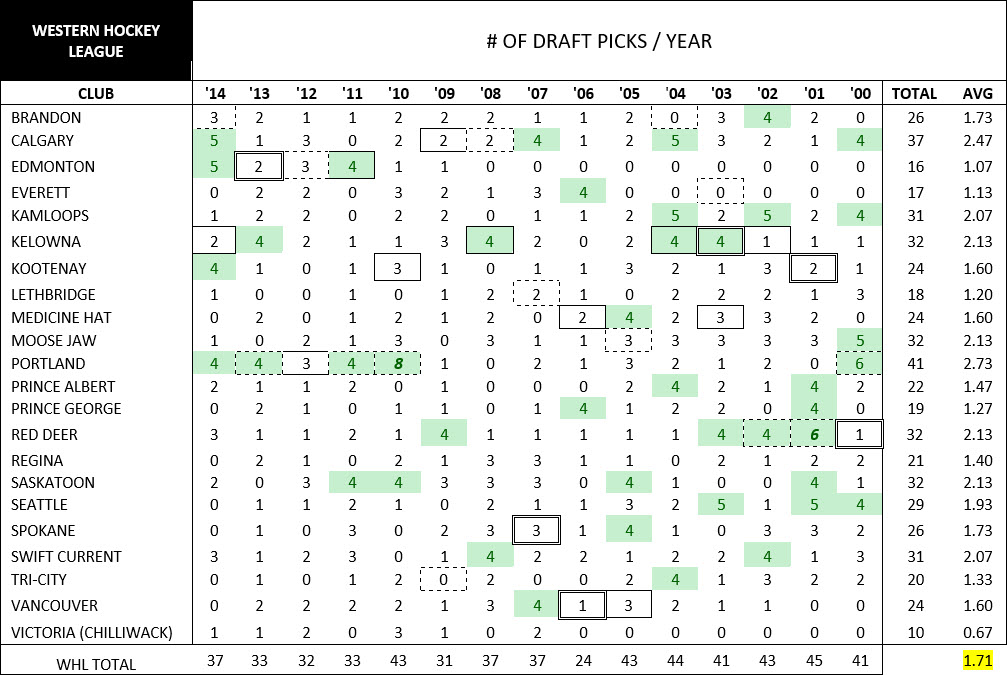 It has happened only two times in the last 15 years where a team in the WHL has had more then 5 players in one season selected at the NHL Draft. The Red Deer Rebels did it once when six of their players were drafted in 2001. The only other team to best this feat was the Portland Winter Hawks in 2010 when they had an impressive 8 players selected in the NHL Entry Draft. Note that these 8 Portland draftees in 2010 represents the most by any one team across all three leagues in Canada within the last 15 years. There have only been three times in the last 15 years within the WHL when neither championship finalist team had an NHL drafted player on their team (03', 04', 09'). Over the last decade and a half the number of drafted players on each WHL team has averaged around 1.71.

Next Up… The OHL 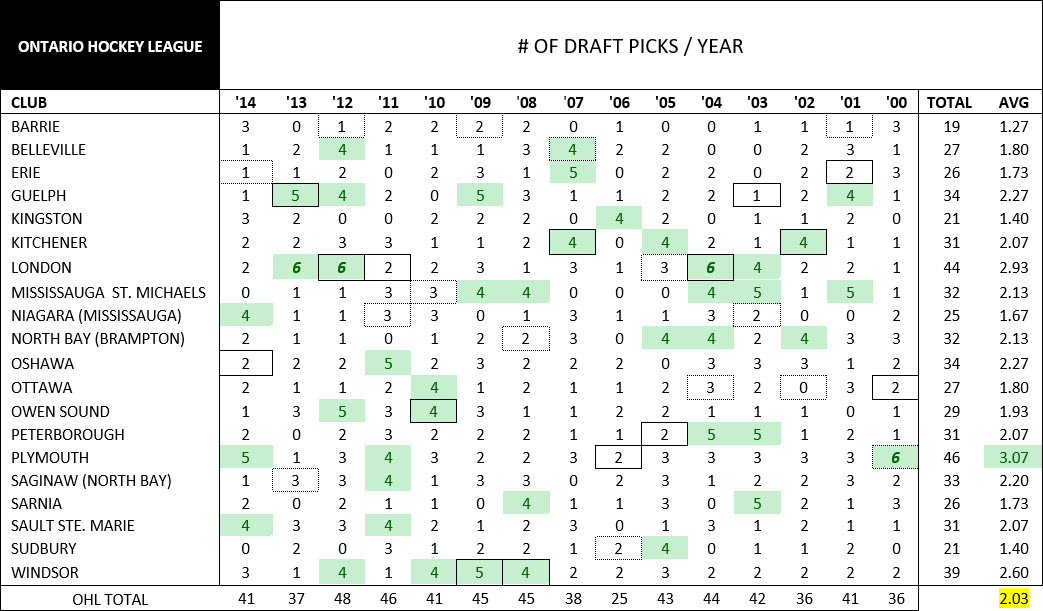 Breaking the 5+ draftees in one year feat has occurred twice as many times in the OHL has it has in the WHL in the last 15 years. This all feeds into the notion that the OHL continues to breed the largest share of NHL players worldwide. With this being said, the 5+ has happened only 4 times in the OHL in the last 15 years and the notoriously successful London Knights have accounted for 75% of these instances. Although this stat seems off the charts, there is one other team who has produced even more NHL players then London. The Plymouth Whalers are second to none in this category having a whopping 46 players drafted into the NHL within the last 15 years. Only once in the last 15 years in the OHL has there been a time where neither championship finalist team had an NHL drafted player on their team (02'). OHL teams on average have +24% more NHL draftees on their teams then the other two leagues within Canada. This number sits at a average of 2.03 drafted players per team over the last 15 years.

Next Up… The Q 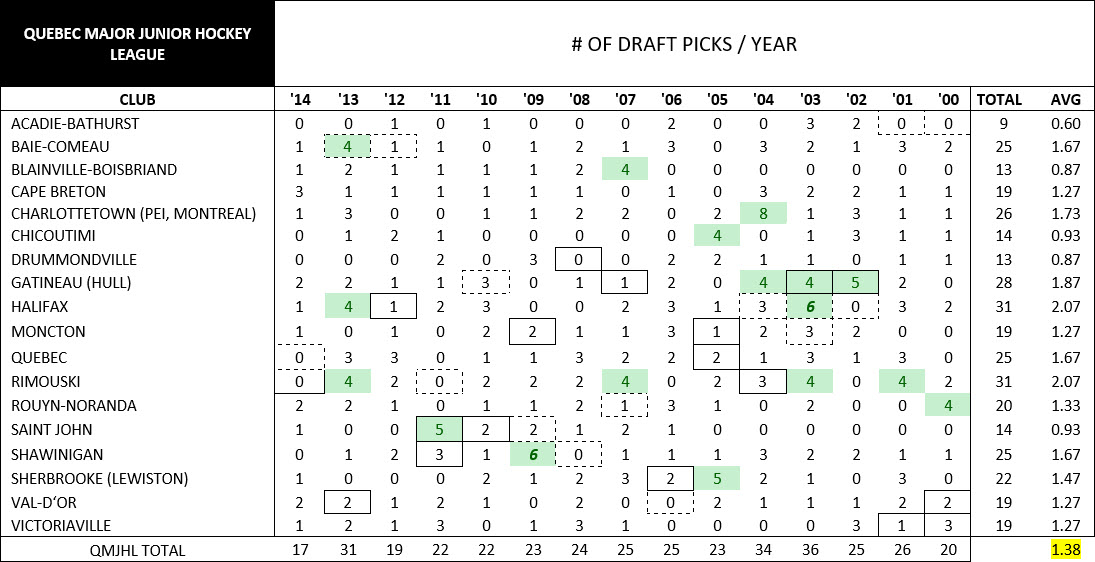 And Lastly… The USHL

Compared to the other three leagues in Canada, the USHL team over the last decade and a half has averaged the lowest number of NHL drafted players, sitting at a mere 1.26 per team, 38% lower the that total of the OHL teams.

Below is a look at the same chart but presented in % terms. Looking at the data this way paints a clearer picture for us to examine.

The first thing to note was that in the late 1990’s and early 2000’s the NHL seen a huge influx of European players hitting the scene. There was a fundamental shift in the speed of play within the NHL which ended up leading to the emergence of European superstars like Olli Jokinen, Marian Gaborik, Daniel & Henrik Sedin, Ilya Kovalchuk, and Kari Lehtonen – all of which were drafted within the Top 3 picks in their respective drafts and all between 1998-2002.

Since then, we can clearly see there has been a dramatic increase of the percentage NHL drafted players coming from both the OHL and USHL leagues, increasing from 12% to 20% and from 4% to 14% respectively.

We need to keep in mind though the data and figures we have discussed today have focused on which team the players had been drafted from, not geographic regions or the country where that individual was born. It is very safe to say there are Europeans playing in the CHL, but the majority of NHL drafted Europeans are still selected from their local hometown teams, not North American leagues like the USHL or CHL.

We could take out the “Other” to eliminate NCAA and European leagues if we want to focus more so on the CHL & USHL data.

From here we can reiterate our initial assumption that the OHL continues to dominate the position of producing the most NHL players annually.

The USHL continues to trend positively upward with regards to the number of NHL players coming from their league, which the opposite seems to be true for the WHL.

I hope you enjoyed this article and please feel free to comment below.